Renee Ball a dancer with the Touch Compass Company was struck down by GBS but made a determined and remarkable recovery to dance again. She interprets her story in this dance routine.

Renee Ball was an agile and graceful young dancer who was moving towards a career in performing arts when tragedy struck. She had just turned 19 and was midway through a Bachelor of Dance Studies when, in just a matter of hours, all promise of a bright future was dimmed.

In March 2010, Renee was crippled by Guillain-Barré syndrome (GBS), a condition that occurs when the body’s immune system attacks the peripheral nervous system.
Within days, the syndrome, which developed after a short bout of glandular fever, had triggered extreme weakness, leaving Renee fully paralysed and unable to eat, talk or breathe without help.
“I’d been incredibly active, then all of a sudden I was lying on the floor in agony and could hardly move,” recalls Renee (23). “Before I got sick, I was intensely busy at university and taking dance classes in the evening.
“I felt run-down, but put it down to being busy. Then I got flu symptoms which lasted for two days – but on the third day, I woke up with a painful stomach and couldn’t move or call out for help. I knew something was seriously wrong,” she says.
“I lost all sensation in my feet and hands, and I was having difficulty breathing.”

Renee’s condition worsened and the family doctor was phoned. He made a home visit and immediately called an ambulance. Renee was rushed to hospital and put on a ventilator. A tracheotomy was performed, she remained on life support for seven weeks and was tube-fed for eight weeks after that.
Guillain-Barré syndrome is a rare condition striking just one in 100,000 people and Renee was affected particularly seriously. “I was in the top 1% of severity,” she says. Within a few days, the condition, which started in her feet, had progressed to her head. “I felt like I was being electrocuted – like the sensation of sharp glass inside my body,” explains Renee.
“In the initial phases, I was in survival mode – the pain was intense. I couldn’t open my eyes or move my eyeballs.
“I plateaued for 10 days without any communication or movement. After that, I was only able to communicate by blinking, making a clicking sound and mouthing words. It wasn’t until two months after the initial onset of GBS that I was able to talk again.”
Dancing was never far from Renee’s mind, and during her recovery process some of the first movements were made to music. “When I was on my ventilator, I did chest pops to Michael Jackson songs in bed! All the way through, dance was part of my healingprocess.”
Her mother Vivian (45) and father David (52) were there throughout the ordeal. “She even lost her smile. It really did affect her whole body,” recalls an emotional Vivian. “Her friends would visit her in hospital and leave in tears because the strong girl they knew, the girl who could do splits both ways, was utterly unable to move.” 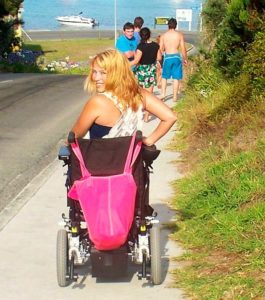 Vivian recalls how in those early days, the idea that Renee would move even a single toe was almost too hopeful a wish. “We had no idea how she would recover. But gradually, she started gaining muscle function, one muscle at a time.”
After two months in hospital, Renee had 10 weeks of rehabilitation. She returned home in a wheelchair and after 12 months started using a walker, splints and crutches. She finally started walking independently in 2012.
“I always knew we would have a ‘new normal’ because of how sick she was. It was just one day at a time – and such a long journey,” says Vivian, who had trained as an occupational therapist a year before Renee’s diagnosis.
Renee is now able to drive again, go shopping with her mum and, she says with a smile, even wear heels! And with the additional support of
a carer, she returned to university and graduated with her degree in 2014.
Her recovery has taken four years and has been punctuated with thousands of milestones, but she has regained most of her flexibility. She’s since made up for lost time with numerous adventures, including a visit to Thailand and an underwater photoshoot.
She’s also found love with supportive boyfriend Asher Korff, and has moved from the Auckland home she shared with her parents and siblings, Matthew (20), Talia (18) and Hosanna (15), to be near him in Palmerston North. There, she teaches dance, is a choreographer and judges dance competitions for three different companies.
“I can’t jump as high as I used to,” says Renee. “I can’t flex my feet and I still struggle with balance. I’m really aware of my own energy output and still have to be careful, but I nearly have full movement back!”
It’s been an emotionally challenging few years for the entire family. Renee’s cousin was Aisling Symes, the little girl who disappeared and was found dead after falling intoa West Auckland stormwater drain in 2009.
“Aisling’s death was very hard on the whole family. Then Renee got sick,” says Vivian. “I think this was as hard as it gets without losing a child.”
But Renee remains positive. “I am still recovering but I’ve come so far and I don’t like to dwell,” she says.
“I’ve changed a lot but I just want to keep on pursuing my passions. I will continue having new experiences, travelling and getting on with life!”